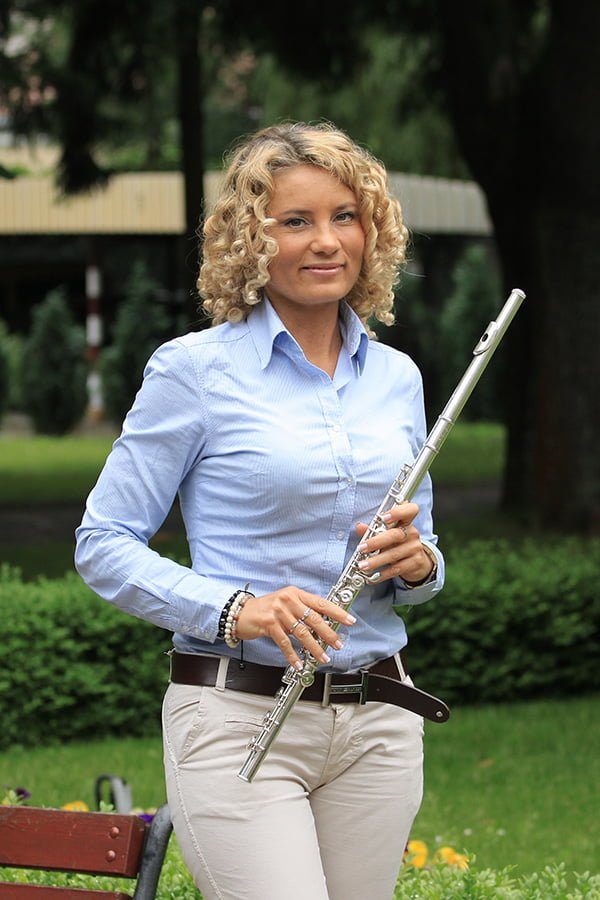 Sylwia Lorenc started playing the flute at the age of eight at the Primary Music School and then continued her musical education at the High Music School in Rzeszów.

She graduated from the Fryderyk Chopin Music Academy in Warsaw where she studied flute with Prof. Elżbieta Dastych-Szwarc. During her studies she participated in many International Master Classes led by the prominent flute players and teachers such as James Baker, Jean-Pierre Rampal, Grzegorz Olkiewicz and others.

In 2003 she was on a concert tour in Quatar and Turkey.

At present she gives many concerts and performances.

She is the first flutist and soloist of the Stanisław Moniuszko Polish Army Concert Orchestra of Representative Artistic Ensemble of The Polish Armed Forces (RZAWP) and the member of the classical wind quintet “Favori”. With these ensembles she gives many concerts and performances in Poland and abroad, among others in Japan, Belgium, Holland, Germany and France.

In 2004 she was awarded with the statuette “Złoty Dobosz” for her outstanding artistic achievements as the flute soloist.

She also made recordings for the Polish Radio and Polish Television (film soundtracks).

Apart from her artistic activity she shows great passion for her work as a flute teacher. The development and achievements of the pupils give her a lot of joy and satisfaction that they can find playing the flute joyful and inspiring which make them realize the beauty of music and open them to the world of art.

What is important in flute lessons? We pay great attention to details of music lessons and the development of musical ideas. We work on correct breathing, articulate and accurate playing. The most important we bring our student to a high standard, where he can perform any piece of music in flute with ease.

What is the main goal? Our main goal is to teach you how to play your instrument regardless of what level you are currently at. We will not place limitations on your ability through our teaching methods but allow you to challenge yourself and achieve greatness! How to play flute fluently? Playing flute fluently does not take place overnight. It is a long process of training, practicing and learning. You need to create the right breathing habit and learn how to manipulate your fingers on the keys in order to produce a beautiful sound. The best way for you to learn how to play flute quickly is by enrolling into Unisono Music School in Warsaw.