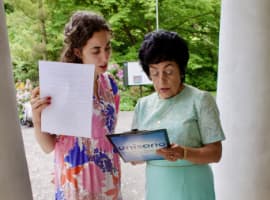 At last we are publishing our report on the new annual concert. The day of June 12, 2021 was long awaited by the students and teachers of our School, as it was the day on which the annual concert was held. Due to the pandemic, we were unable to hold the concert for several months. That is why now, with the restrictions relaxed, we could finally enjoy making music on the stage with the right precautions. We would like to emphasize that in the pictures you will find only the students who gave their consent to publish their images. By taking up studies in our school, you can decide about the publication of information and pictures, as well as about changing them.

Our instrumental classes were happy to perform the concert compositions. Below you can find photos of music performances from the event.

From Yulia Leviuk’s violin class was represented by:

From the violin class of Weronika Wyka performed:

The concert concluded with a performance by siblings Emily and Sam Chandler.

.Students of the violin and cello classes were accompanied by our piano teacher Dr. Artur Chmara

The concert was announced by Liza Pietraga. At the end of our musical meeting, Director of the School Zofia Zwolińska handed out diplomas of distinction to all the soloists and congratulated them on their successful performances.

The Music School Principal thanked not only the teachers for their dedicated work with the students, bringing such professional results, but also the Parents and Grandparents for their concern for the artistic development of our students. Thank you to all the participants in the 2021 Annual Concert.

The meeting ended with the traditional sweet treat and wishes for a wonderful vacation season.

Nature at the Polish Botanical Garden

The day of the concert is also a great opportunity to get acquainted with the venue. The PAN botanical garden contains many interesting plants. Below we will post some photos taken after the concert.