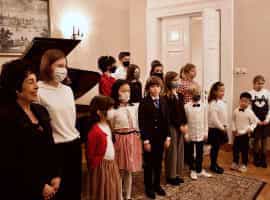 To start with the Fall Concert 2021 was a special event for us, and we were able to come together again in 2021 to hear our students perform. In all honesty the music is a universal language that can bring together people from all cultures and backgrounds to share the joy of art. The event took place on November 14th at the Szustra Palace in Warsaw, a place where some of the most renowned Polish musicians have performed.

Below you can find pictures from the Fall Concert 2021:

This concert was also special because it featured three students who had started school less than three months earlier. Additionally this group included four-year-olds Freddy, Eliza, and Emil.

The concert began with a performance by Ella Bai, a graduate of our School, who studied with Zofia Zwolińska. What is more, she is currently a student at the secondary music school in the class of Joanna Okoń (who is also a former student of Zofia Zwolińska).

Not to mention Freddy was the first of our students to perform “Ode to Joy” by Ludwig van Beethoven and a folk song “Coming Round the Mountain”. As a matter of fact Freddy is a student of Julia Lewiuk’s piano class.

We can argue that concerts are the key to music education. The events allow children to experience live music in person and understand the differences in performing versus practicing at home. Let alone traditional music education has been in decline in most institutions for several years. In fact arts is something we care about in these difficult times.

Furthermore with concerts schedule, students can now use all their skills to bring back the joy of learning about different pieces.

Ending of the Fall Concert 2021

Above all the music is core to our school life. The concert we experienced in November is one of the most amazing memories we have. Our school would not exist in this form without concert music. Here is our Fall 2021 Concert.

Last but not least we are already preparing for the Christmas Carol Concert. Moreover we will meet again in the Szustra Palace, whose interior echoes the sounds that resounded for years in the concert hall.

In the meantime, the Principal and professorial sends the best wishes all students, Parents and Supporters of our School

BEST WISHES FOR THE CHRISTMAS AND NEW YEAR