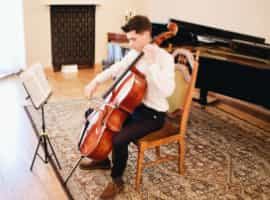 2022 Grand Concert is a continuation of our musical tradition that has started in year 2008. On Sunday, June 12, 2022, we met at Warsaw’s Szustra Palace for the festive Annual Concert of our Music School. The long-awaited concert happened at the end of the school year. Students and teachers have put a lot of effort into making this event a reality and everyone is excited about the performances. We attended the concert of our institution in a charming historic palace and former home of a Warsaw artist. Leading Polish musicians have been performing here for years.

Concert of the students in important historical place

Szustr Palace is the heart of Warsaw’s prestigious musical traditions. The beauty of the concert was undeniable. First the talent on the stage, second Impeccable acoustics. There is something about a live performance that can’t be beat. Our students performances of their earned melodies on stage is an experience like no other. The audience seeing the results of work after a whole year of learning. In the light of this wonderful event there is nothing better we could expect.

By the same token at the end of the concert, two violinists from Joanna Okoń’s (former Zofia Zwolińska students of our Unisono Music Academy) class performed as guests:

Maria Kwach, in whose performance we heard Fritz Kreisler’s “Prelude and Allegro in the Puniani style.” represented our Peter Nermer’s violin class.

Sam Chandler, who performed the Prelude from Johann Sebastian Bach’s Suite No. 1 in G Major was representing our teacher Maria Kosacka’s cello class.

Liza Maria Pietraga announced concert. Our violin teacher Piotr Nermer was responsible for the photo documentation . At the end of the concert, School Principal Zofia Zwolinska handed out diplomas of distinction to the soloists, thanked the educators for their work with the students and congratulated all the performers for such successful performances at the Annual Concert, which is a summary of the achievements of the work of the entire school year.

Above all Zofia Zwolinska thanked Students, Parents and Grandparents. It must be remembered that their commitment contributed to the development of their Children.

A successful concert is a combination of many elements. First, the concert participants must either be able to perform the pieces efficiently, or have performed well at previous concerts. Music was immersive to the audience. Finally, the concert must showcase all the hard work the students put into it. The concert was a great success! Admirably performed pieces were cheered on by the audience. Not to mention to, the students played pieces they have been working on for a whole year. Artist performers enjoyed every minute of it. In other words we had a great time at the concert.

Why concerts are important part of musical development?

Concerts provide a unique opportunity for musical development. For this reason we pay so much attention to live performances. Seeing and hearing the benefits, we enable musicians to experience the concert after hours of hard work. To put it differently they can hear performed music in new and challenging environment. Events also give musicians an opportunity to meet other musicians and learn from them. With attention to real experiences on the stage we can learn more about ourselves as an artists.

In order to put this into the life, Unisono Music Academy is offering a variety of concerts throughout the year. Designed to help musicians, concert effectively enable pupils develop their skills. The academy’s concerts feature world-renowned performers, and offer a chance for musicians to see how the professionals do it. In addition, Unisono Music Academy’s concerts are open to the public, so everyone can enjoy the experience.

By all means concerts are an part of musical development because they offer musicians a chance to hear live performances, to meet other students, and to learn from the professionals, In hope that music is crucial to our culture, we push towards classical music tuition. We are truly dedicated to this art.