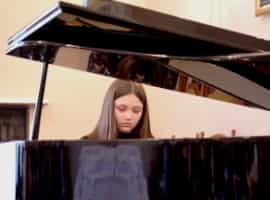 Unisono Music Academy Warsaw is proud to present our annual Spring Concert 2022, a special event that brings together all of our talented students to showcase their musical abilities. Our institution organizes periodic concerts related to different themes. We are glad that this concert brought clear joy to the participants of the event. Every concert at the music school is a wonderful opportunity for students to showcase their talents and skills. The students of the school perform for their peers, family and friends. The concert usually features music from a variety of genres, including classical, jazz. The entire concert usually lasts about an hour, which is exactly what happened in this concert.

Spring is the season of new life, and many plants begin to bloom and grow. The colors of the flowers are very bright and cheerful. Spring is a time of new beginnings, which makes it one of the most popular seasons of the year. Spring is also the time when nature begins to show its colors again after being dormant for so long during the winter months.

The soloists were announced by Julia Lewiuk. The Music School Spring Concert is an annual event for students in our author’s music school. The event is free to our students and families of students. We are excited to continue our series of musical events.

The concert began with small Chuchu, who played a miniature from the violin pedagogy collection entitled “Fellows.”

This concert marks the start of a new year of music-making and is a chance for our students to perform their main pieces in front of an audience of spectators. Our music teachers, who are all practicing musicians, will also be performing at the concert, setting a good example for our students and demonstrating the high standards of musicianship that we strive for at Unisono Music School.

We believe that participating in concerts is a great way for our students to expand their music skills and gain valuable performance experience. The annual Spring concert is a celebration of the hard work and dedication of our students and teachers, and we are excited to share our love of music with the community. If you are interested in attending or participating in this or any of our future concerts, we recommend reaching out to us via phone or email. The contact details can be found on our website. We look forward to seeing you at the Spring concert and at many more musical events in the future.

After the concert, Principal Zofia Zwolińska invited all the soloists to the great hall in order to document the concert with a joint photo and congratulate them on their very successful performances. Zofia Zwolińska also thanked the teachers of the school for their work with the students. She also thanked the parents and grandparents for making sure that their children practice their instruments at home.

Why spring concerts have something that’s unique about them?

Spring concerts are special because it is a time to celebrate the end of winter and the beginning of spring. It is also a time for students and their families to come together and enjoy music together. There are many things that are amazing about spring concerts at the music school. First, the weather is usually nice and people are in a good mood. The concerts are also a great opportunity to meet new talent and listen to different styles of music.

We think performing at concerts is good for students

Students at Unisono Author’s School of Music, are encouraged to attend music concerts to perform and gain stage experience. Performing in front of an audience is a great way to improve musical skills and test yourself in a situation other than a controlled lesson. It is also a great way to network with other young musicians. Frequent performances in front of audiences also help students feel more comfortable on stage, and have a positive impact on future public speaking skills as well. Students attending a music school should not only learn theory and composition, but also perform at concerts.

Concerts can introduce students to a variety of musical genres and help develop their musicality. Additionally, students at our School often have the opportunity to perform as part of a duo, or in a larger ensemble. Participation in concerts also can help shape future career goals for students majoring in music.

What are the benefits of attending the music school’s spring concert?

The spring concert is a great opportunity to see talented music students perform. It is also a great way for parents to get an idea of what their student is doing in class and how they are progressing. Attending a concert at a music school has many benefits. It can be more affordable than going to other concerts, you can see your child’s progress and it’s fun!

Also, you’ll be able to see how they present themselves on stage and how they interact with each other and with the audience. You will be able to see if this is something you would like your child or you to participate in.

What is beautiful about classical Spring Concerts?

Classical spring concerts can be a beautiful and uplifting experience for audiences and performers alike. The spring season often brings with it a sense of renewal and rejuvenation, which can be reflected in the music performed during these concerts.

One of the beautiful aspects of classical spring concerts is the opportunity to hear a wide variety of music. From beautiful orchestral pieces to solo piano or violin works, these concerts can showcase a diverse range of compositions and styles.

Another beautiful aspect of classical spring concerts is the opportunity to hear live performances of some of the most beloved and iconic works in the classical repertoire. These concerts can be a great chance to experience classical music in all its grandeur and beauty, with the added thrill of hearing it performed live by talented musicians.

Overall, classical spring concerts can be a wonderful way to celebrate the beauty and joy of music, and can provide a much-needed respite from the stresses of everyday life. Whether you are a seasoned classical music fan or new to the genre, these concerts can be an enriching and uplifting experience.

Little history about composers whose work was featured during the concert

As we delve into the realm of classical music, we can enrich our knowledge by studying the works and lives of composers. This type of music education enables us to better appreciate classical music as we explore its history, context, and the contributions of individual composers. Through this process, we can gain a more thorough understanding of the creative process and the cultural and historical forces that have influenced classical music.

Elena Gnesin (also known as Gnessin or Gnesina) was a Russian composer and pianist who was active in the early 20th century. She was a member of the Gnessin sisters, a trio of composer-sisters who were well-known in Russia for their music and their contributions to music education.

Gnesin’s music is known for its expressive melodies and evocative harmonies, and she was particularly skilled at writing for the piano. Some of her notable works for piano include “The Snowstorm,” “Fancy,” and “The Old Castle,” which is based on a poem by Alexander Pushkin.

William Gillock (1917-1993) was an American composer and pianist who was active in the 20th century. He is best known for his compositions for piano, which are characterized by their technical demands, musicality, and melodic appeal.

Gillock composed over 200 works for piano, many of which are designed for students and are widely used in piano pedagogy. Some of his most well-known works include “Lorraine’s Lyric,” “Caribbean Holiday,” and “Bluegrass Boogie.” In addition to his piano compositions, Gillock also wrote works for other instruments, including orchestra and choir.

Georg Friedrich Handel (1685-1759) was a German-born composer and pianist who is best known for his operas, oratorios, and concerti grossi. He was a prominent figure in the Baroque period and is widely considered one of the greatest composers of the era.

Handel’s music is known for its dramatic and expressive qualities, as well as its technical demands and virtuosity. Some of his most well-known works include the operas “Alcina” and “Julius Caesar,” the oratorios “Messiah” and “Samson,” and the concerti grossi “Opus 6” and “Opus 3.” Handel’s music has been widely performed and recorded, and it remains an important part of the classical repertoire today.

In addition to his work as a composer, Handel was also a skilled pianist and organist, and he played a significant role in the development of keyboard music in the Baroque period. His music has had a lasting influence on classical music and continues to be studied and performed by musicians around the world.

Jose Ferrer (1912-1992) was a Puerto Rican actor, director, and composer who was active in the 20th century. He was best known for his work in film, television, and theater, and he won numerous awards for his performances, including an Academy Award for Best Actor for his role in the film “Cyrano de Bergerac.”

Ferrer was also a musician, and he composed a number of works for piano and voice. Some of his notable compositions include “El Canto de mi Madre,” “La Cucaracha,” and “El Machete.” Ferrer’s music is characterized by its rhythmic and melodic appeal, and it reflects his Puerto Rican heritage and cultural influences.

Ferrer’s music has been recorded and performed by musicians around the world, and it remains an important part of the classical repertoire. In addition to his work as a composer, Ferrer also played a significant role in the development of theater and film in the United States and around the world, and he is remembered as a pioneering figure in these fields.