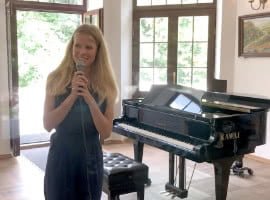 Concert where all students perform their main pieces

In this passing school year 2018/2019 our teachers gave two teacher-concerts while our students gave six student-concerts.

Shortly before the Annual Concert our students which was held in the beautiful Concert Hall of the Fangor Mansion in the Botanic Garden of the Polish Academy of Sciences in Powsin a group of our students who were preparing themselves for the international ABRSM exams gave on  June 23rd  a concert at the Sadyba Center for Cultural Education in Warsaw. These students were: Jan Piwoński, Karolina Kowalska, Barbara Sobka, Madeleine Hojer and Michał Kotas. In addition, this was for them an excellent opportunity to test their form ahead of the coming international exams.

The Annual Concert 2018/2019 was held on June 8th  2019. From the very beginning of the Concert we could feel among our students a joyful and inspiring atmosphere in the concert hall. Besides the students enjoyed the possibility to present the effects of their musical education and the audience applauded warmly all performers.

The Concert was opened by the students of Alicja Zdrojewska vocal class.

Krzysztof Komarnicki class of guitar was represented by:

The students of  Zofia Zwolińska class of violin were:

In fact at the end of the Concert Natalya Voloshyna and Ella Bai bravado performed the famous virtuoso Concert in d-minor For Two Violins, BWV 1043,  by Johann Sebastian Bach. Furthermore this concert was played at encore in Fangor Mansion in order to continue the old tradition of the violin masters who showed this way their respect to that magnificent masterpiece.

Moreover, the performers were announced by Krzysztof Komarnicki.

In conclusion, after the Concert Zofia Zwolińska, Director of the Music Academy, congratulated all soloists and their teachers the effects of their hard work and best results achieved during the entire school year and wished them all good luck and happy vacations.

So see you all in good shape in the new school year in September 2019.