Home » 50th Anniversary of the pedagogical activity of Zofia Zwolińska 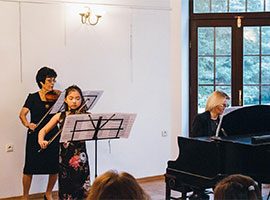 December 17th  2016 Unisono Music School celebrated an unusual festivity. We met at Fangorówka manor in the Botanic Garden of the Polish Academy of Sciences in Powsin and participated in the Musical Concert celebrating the 50th Anniversary of the pedagogical and artistic activity of Zofia Zwolińska – the founder and director of the Music School Unisono in Warsaw.

In the final part of the concert, the jubilee, professor Zofia Zwolińska, and her student,  Ella Bai, performed Double Violin Concerto by Antonio Vivaldi.

After the musical part of the event Zofia Zwolińska related about her experiences during her pedagogical and artistic carrier.

Finally, Berenika Pietraga, and her sister Liza who announced the performers during the concert, distributed among all the guests souvenirs commemorating the event.

The event was continued in a cordial and friendly atmosphere long after the official part was over. Zofia Zwolińska recalled the years of her pedagogical and artistic carrier, the beginnings of her Musical School Unisono,  and presented plans for the School for the time to come.