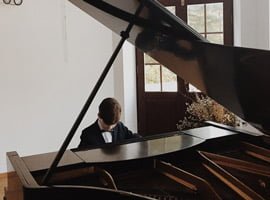 This year the 2017 Christmas Carol Concert of our Music School was performed on 28th January 2017 in a frosty midday of winter in Powsin Botanic Garden Mansion.

Unisono Music School is excited to announce our upcoming carols concert, a festive and enjoyable event that is sure to put you in the holiday spirit. This annual concert is an opportunity for our students to showcase their musical skills and perform holiday-themed music for the community.

At Unisono Music School, we are dedicated to providing high-quality music education to students of all ages and abilities. Our talented teachers are experienced musicians who are committed to helping students reach their full potential. We offer a wide range of music programs, including individual and group lessons, as well as performance opportunities like our carols concert.

The long awaited time for this musical event was filled with rehearsals preparing carols to be produced the audience which still recalled the Christmas that echoed in their minds. During the Concert our students frequently played the same carols providing invariable pleasure in the auditorium and bringing joy not only to the audience but also to the  performers themselves.

The program included not only well known Polish carols but also Ukrainian melodies performed by Andżelika Czigiloj. She also played John Whiteworth’s Masquerade & Dance. These both compositions were arranged by our Music Academy professor Krzysztof Komarnicki.

The program performed by the students of our School  was interesting and variegated.

At the end of the Concert the Unisono group performed several traditional carols.

Even though two violin players from the Unisono group were unable to participate and perform Zofia Zwolińska the Director of the School decided to retain that number in the program.

The great audience participating in the 2017 Christmas Carol Concert applauded warmly and joyfully the productions of all and each of our students.

At the end of the event Director Zofia Zwolińska congratulated all players, professors and families for their works and achievements saying that the level of performance is higher at every consecutive concert.

Bit of education on composers featured during carols concert

Enhancing our understanding of classical music involves learning about the works and lives of composers. This type of music education allows us to better appreciate classical music as we investigate its history, context, and the contributions of individual composers. By studying the compositions and background of the musicians whose works were featured in a concert, we can gain a deeper understanding of the creative process and the cultural and historical influences that have shaped the music. By learning about these aspects, we can gain a greater appreciation for the classical music we hear and the musicians who created it.

Johann Baptist Vanhal (1739-1813) was a Czech composer and musician who lived in the late 18th and early 19th centuries. He was active in the classical music scene in Austria and Germany, and composed works in a variety of genres, including symphonies, operas, and chamber music. Some of his most well-known works include his symphonies in D Major and C Major, as well as his chamber music for string quartet. Vanhal was highly regarded in his time and his music was widely performed, but his fame and influence waned in the 19th century as the classical music scene underwent significant changes. Despite this, his music is still occasionally performed and has experienced a resurgence in popularity in recent years.

Johann Sebastian Bach (1685-1750) was a German composer and musician who is widely regarded as one of the greatest composers in the history of classical music. He composed a wide range of works, including instrumental and vocal music, operas, and choral works. Bach is known for his complex and highly technical compositions, which are characterized by their intricate counterpoint and rigorous structure. Some of his most well-known works include the “Mass in B Minor,” the “Brandenburg Concert,” and the “Well-Tempered Clavier.” Bach’s music has had a profound influence on classical music and continues to be widely performed and studied to this day.

Cornelius Gurlitt (1820-1801) was a German composer and musician who lived in the 19th century. He is known for his choral works, including his “German Mass,” which was widely performed in Germany during his lifetime. Gurlitt was also an important figure in the development of music education in Germany, and was the director of the Leipzig Conservatory for many years. Despite his contributions to music and music education, Gurlitt’s music is not as well known today as that of other composers of the same period. However, some of his works are still occasionally performed and studied by musicologists and historians.