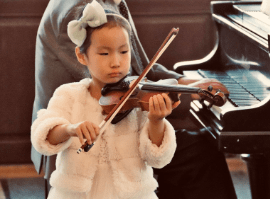 Our School started its series of concerts in the school year 2018/2019 on November 17th at the Fangorówka mansion in the Botanic Garden of the Polish Academy of Sciences in Powsin. The beautiful Garden was illuminated by the sunny autumn light that contributed much to the artistic atmosphere of the concert. Our pupils and the audience enjoyed this colorful  surrounding with pleasure.

The extensive program of the concert included diverse and well harmonized works composed by different composers. At the beginning we could listen to the very young performers who only recently started their musical education and played simple musical miniatures, as well as more advanced students who performed works by well-known renowned composers of the classical and romantic period.

The Julia Leviuk piano class was represented by:

In the final part of Autumn concert we enjoyed Ella Bai (violin) playing “Adelaide” – the  famous work by Wolfgang Amadaeus Mozart, and

Zofia  Zwolińska, the Director of the UNISONO Music School, congratulated all soloists, both the youngest beginners and the elder and more advanced students, as well as all teachers, for their work and artistry, and exposed especially the progress made by the pupils that brings benefit and satisfaction to all of us.

Finally, Director Zofia Zwolińska invited all  to the next concert (Concert of Carrols) that will be held on January the 19th next year.
The concert ended, as usual, with candies for all.