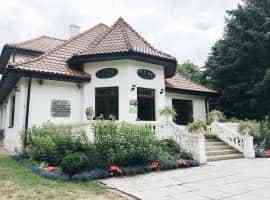 On June 16th at FANGOR mansion in Powsin our School completed its experience with music in the school year 2017/20018.

This passing school year was abundant with musical events. Our teachers did two concerts and our students did five concerts all carried out at the beautiful Fangor mansion in the Botanic Garden of the Polish Academy of Sciences in Powsin. Its exceptional interior and excellent acoustics contributed to the fact that our students performed even better than during their regular rehearsals at School giving great joy to their teachers, parents and audience.

The Concert was opened by Pola Rossokhina who sung a song dedicated to her mother, and afterwards she performed Hummel’s “Light Song” on piano. Pola attends the piano class of Julia Leviuk.

Krzysztof Komarnicki class of guitar was represented by:

Zofia Zwolińska class of violin was represented by:

Magda Lewandowska class of piano was represented by:

Finish of The Year

At the end of the Concert Zofia Zwolińska, Director of the School, handed diplomas with distinction to the pupils of our School who deserved it due to the fact that their work at home, during rehearsals at School and their numerous performances in concerts contributed a lot to their musical and artistic development.

Summing up the achievements of our School during the last school-year (2017-2018) Director Zwolińska exposed the fact that frequent playing and presenting musical material during concerts stimulates concentration and artistic development of the pupils of our School. Moreover, doing this our pupils get necessary “stage preparation” for their future carrier which cannot be achieved in standard school environment. Small faults which can happen even in “adult”playing, do not disturb the teaching process and can be identified and corrected. Performing during concerts with audience gives our students enormous satisfaction and mobilizes them for further work and development.

We wish you happy vacations and see you back at School (September the 3rd) at the beginning of the new School Year 2018 – 2019.