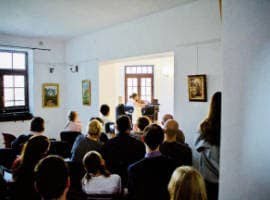 Finally awaited Unisono Music Academy Christmas Carols Concert 2017. Even though previous concert of our  School was held not so far from now, we met again 17. December 2017 in Fangor manor-hous to give another concert, this time devoted mostly to carols.  This kind of musical program is one of the most beloved programs performed by our pupils who wait for it impatiently  and work hard to be well prepared to the event. This time, our repertoire encompassed not only classical and traditional carols but also pearls of classical music. This made it diversified and interesting not only for the performers but also for the audience.

A classical carols concert is a festive and joyful event that celebrates the holiday season through music. It typically features traditional carols and classical Christmas music, performed by our students musicians using classical instruments and techniques. This was a wonderful source of entertainment and cheer for audiences of all ages. Attending a classical carols concert was a memorable and enjoyable experience, as it provided the opportunity to hear beloved carols and holiday music performed in a classical style. It is a great way to get into the holiday spirit and celebrate the season with friends and loved ones.

Magda Lewandowska class of piano was represented by

and this was the last composition presented at the end of the concert.

The program was led and announced by Berenika Anna Pietraga

At the end of the event Zofia Zwolińska, Director of the Unisono Music School, congratulated all performers and enhanced them to develop their musical skills and artistry for their personal satisfaction and the reputation of our School. Director Zwolińska expressed also her thanks and appreciation to the teachers of the School exposing their successful engaged, professional and pedagogical work with their pupils. Last but not least, she addressed her thanks and appreciation to parents, grandparents and all sympathizers of our School, as well as to the entire audience which warmly applauded the soloists.

Finally, Director Zwolińska invited all to the New-Year Concert that will be performed by teachers of our School on January 7th 2018 at 12.00 O’clock at the Fangor manor-house in Powsin.

Carlos concerts are special for us

Carols concerts are a festive and joyful way to celebrate the holiday season, and they can be a wonderful source of entertainment and cheer for audiences of all ages. Special events like this can be highly anticipated and often draw a large and enthusiastic audience.

There are a two things that can contribute to the success of a carols concert, such as:

History of carols songs in Europe

Carols are traditional Christmas songs that are typically associated with the holiday season in Europe. The history of carols dates back to the Middle Ages, when they were originally sung in Latin by religious communities as a way to celebrate the birth of Jesus.

Over time, carols began to evolve and incorporate elements of local folk music and cultural traditions. In the 19th and 20th centuries, carols became more popular and widely known, and many new compositions were written in English.

Today, carols are an integral part of the holiday season in many parts of Europe, and they are enjoyed by people of all ages. Carols are often sung at Christmas parties, church services, and other holiday events, and they can be performed by soloists, choirs, or orchestras.

Overall, carols are a rich and enduring part of the holiday season in Europe, with a history that dates back to the Middle Ages. They are enjoyed by people of all ages and are an important part of many holiday traditions.