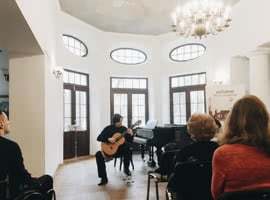 Crystal Sounds – 2018 Unisono Musical School Teacher’s Concert. Professors Concert In Botanic Garden Mansion. With our UNISONO Musical School  Teacher’s Concert we celebrated the beginning of the New Year 2018. This time our Concert was entitled “Cristal Sounds” and took place on January  7th in the concert hall of the Fangor Manor situated in the beautiful Botanic Garden of the Polish Academy of Sciences in Powsin.

It was the second concert  organized and given by our School in the Teacher’s of the UNISONO Musical School program. We were invited by the Director of the Botanic Garden to take part and enjoy the unique climate of the Fangor Manor and the surrounding nature and enrich it with the subtle sounds of classical music.

Among the soloists we have the possibility to listen and enjoy: Krzysztof Komarnicki (guitar), Magda Lewandowska (piano), and a guest artist  and former student of Director Zofia Zwolińska – Joanna Okoń (violin) accompanied by Katarzyna Glensk (piano).

At the end of the Concert  Magda Lewandowska (piano) performed:

The audience in the concert hall warmly applauded the soloists for their artistry in musical performance.

The concerts performed by the teachers of our School have unique character . The same can be said about concerts delivered by the students of our School which are performed in the Fangor  manor situated in the majestic surroundings  of the Botanic Garden of the Polish Academy of Sciences in Powsin / Konstancin.