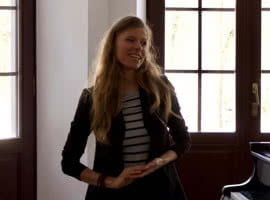 Spring Opening Concert in Botanic Garden. This year the weather delivered us an unexpected surprise. The Spring Concert of our School in the Botanic Garden of the Polish Academy of Sciences in Powsin which we hoped to do in the warm atmosphere at the outset of Spring, on 18.03.2018, was delivered in the beautiful winter surroundings. Frost looked through the windows into the concert hall of the Fangorówka manor, but inside the hall was a joyful spring- atmosphere of music.

At the end of this part of the Concert Catarina Lindo performed Day RiseUp.

In the next part of the Concert we heard pupils representing instrumental classes:

The performers were announced by Berenika Zwolińska. After the musical part of the Concert Director, Zofia Zwolińska, congratulated all performers and their teachers well done job and invited all to next concerts of our School which will be done later this school year. At the end of the event, as usual, Berenika Zwolińska welcomed all to the table with chocolate candies.

Why attending and participating in Spring Opening Concert is beneficial

Music has been a part of human culture for centuries. It is a universal language that transcends geographical and cultural boundaries. The ability to create music is one of the most fundamental human traits. The benefits of classical music and the arts are not limited to just what we can see and hear. Spring Opening Concert music offers many benefits that are not immediately apparent in the moment, but have long-lasting effects on our lives.

There is evidence that children who study an instrument or take lessons in an art discipline have greater cognitive development than their peers who do not participate in these activities.