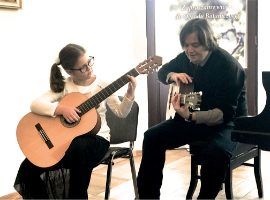 This time in the Pre-Spring Sunday, March 17th 2019 we met at the friendly Fangor Mansion in the beautiful Botanic Garden of  the Polish Academy of Sciences in Powsin, near Warsaw.

The program of the Concert was a real challenge for the young musicians, both for the beginners and for the more advanced young artists. They all showed their best so that their performance had a character of professional rendering of the musical works they presented.

The Concert was highlighted by a rendition of the first part of the Spring Sonataby Ludwig van Beethoven played by Ella Bai.

Zofia Zwolińska, the Director of the UNISONO Music Academy expressed her warm gratitude to all the soloists for their progress and achievements, and to all the teachers for their successful work. Finally, Director Zofia Zwolińska invited all to the next concert to be played by the professors of the UNISONO Music Academy and will be open to all guests and visitors of the Botanic Garden of the Polish Academy of Sciences.